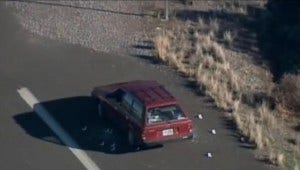 A couple on vacation in Arizona was shot and killed on a busy highway. Authorities are hoping a nearby cop killing case may help to solve the murder mystery.

They hope a witness comes forward. Anyone who...

(D'Evelyn) "May have seen a car pull out fast or some activity that was suspicious."

...on a highway near Sedona, Arizona, Friday. When a man and woman vacationing from New Hampshire were shot and killed by somebody...

...Yavapai County Sheriff's spokesman, Dwight D'Evelyn might get help from Maricopa County where early Sunday a Sheriff's Deputy was shot to death by a suspect who was then shot and killed. Now investigators are looking to see if the same gunman, using the same rifle, killed the couple and the deputy.