Thirteen years ago, on September 11, 2001, our nation was attacked. We pause today to reflect -- to remember and honor those we've lost.

Americans are a resilient people, and that resilience was on display at the ceremony in lower Manhattan that marked the 9/11 attacks 13 years ago.

Names were read at the plaza, almost 3,000 of them, and while the tone was somber, some family members also took that time to look forward...

(Family Member) " Even though I really didn't know you, you will always be family in my heart and I will always love you. And in your honor, I have decided to serve our country with the United States Marine Corps."

People of all ages gathered to pay tribute to those who died, at times, taking on the feel of a reunion. A plaza of people who will forever share the bond of losing a loved on 9/11.

President Obama laid a wreath at the Pentagon this morning to mark the 13 years since the 9/11 attacks.

Speaking at the crash site, President Obama reflected on the lives that were lost on September 11th, 2001, including those who died at the Pentagon.

(President Obama) "Here once more we pray for the souls of those we remember... for you, their families, who love them forever."

Earlier, at 8:46 am, the President, First Lady and Vice President Joe Biden bowed their heads in a moment of silence on the South Lawn of the White House. 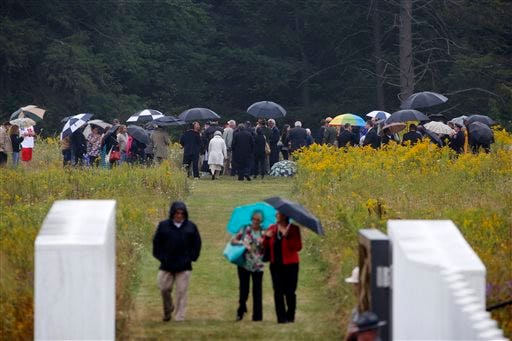 And 13 years after 9/11, they remembered on the field where a plane crashed in Pennsylvania.

It's the flight where passengers fought back and battled the terrorist hijackers until United 93 crashed.

The ceremony 13 years later included tolling bells right when it went down on 9/11 at 10:03 am. Then the reading of the names of the 40 passengers and crew members killed.

A Congressional Gold Medal was presented honoring the victims posthumously and former House Speaker Dennis Hastert donated to the Flight 93 National Memorial the flag flying atop the Capitol that day smudged by smoke from the fire at the Pentagon.

FOX News Radio's Tonya J. Powers takes you through the events of 9/11 (**Note nature of sound**):

Watch an official time-lapse movie for construction of the 9/11 Memorial Museum courtesy of EarthCam:

LISTEN to a collection of sounds from the 9/11 attacks (**Note nature of sound**):

Many people are remembering those lost on September 11th with a trip to the 9/11 Museum and Memorial in lower Manhattan.

FOX News Radio's Tonya J. Powers takes you on a tour of the museum:

CLICK HERE fore more on the 9/11 Museum and Memorial.

VIEW PHOTOS from the 9/11 Museum and Memorial (Photos by FNR's Tonya J. Powers):