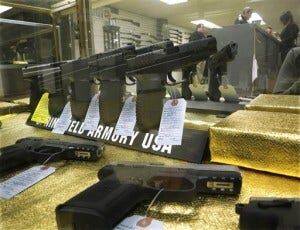 The gun debate continues in the United States. President Obama will continue to press his case for tighter gun restrictions during an appearance in Chicago today. Meanwhile, the NRA has responded to the President's position on this issue.

President Obama talked about it during the State of the Union address.

(Obama) "In the two months since Newtown, more than a thousand birthdays, graduation, anniversaries have been stolen from our lives by a bullet from a gun."

The NRA has now responded.

(LaPierre) "They only care about their decades long, decades old gun control agenda."

(LaPierre) "Ban every gun they can, tax every gun sold, and register every American gun owner."

CLICK HERE for more from our month-long special series, "Guns in America."