The Clinton Global Initiative aims to get world leaders focused on solving the world's problems. Tuesday, the two men vying to serve as the leader of the United States for the next four years gave their views on that.

(Romney) "If, somehow, foreign aid can really leverage that massive investment by the private sector, it may be able to exponentially expand the ability to not only care for those that are suffering, but also to change their lives on a permanent basis." 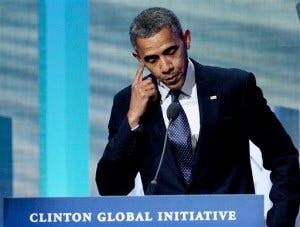 President Obama's speech was a call to action on human trafficking.

(President Obama) "Congress should renew the Trafficking Victims Protection Act.  Whether you are conservative or liberal, Democrat or Republican, this is a no-brainer.  This is something we should all agree on."

WATCH more on the speeches at the Clinton Global Initiative: