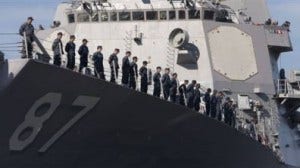 The U.S. Navy has dozens of its ships moving offshore and into the Atlantic Ocean, to get out of the path of Hurricane Irene.

FOX News Radio's Steve Taylor has the details in this installment of our ongoing series on National security:

36 Naval vessels, including the aircraft carrier Dwight D. Eisenhower, are sailing away from Norfolk, Virginia because the naval base there expects to get a strong dose of Hurricane Irene. The plan is to get the ships beyond the storm's path. That way they can avoid the damage that ships can suffer when they're tied up at the dock when a storm surge sweeps in. The Commander of the Second Fleet, Vice Admiral Daniel Holloway says having the ships underway also makes them available to help with disaster response after Irene has passed.