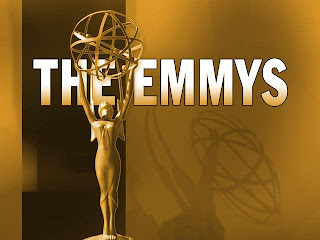 Got no plans Sunday evening?
Are you one of those people who dread SUNDAY night because the weekend fun has come and gone?!
FEAR NOT… I will be LIVEBLOGGING the 60th Annual Emmys THIS SUNDAY NIGHT AT 8P ET OVER AT THIS FOX NEWS’ “ON THE SCENE” BLOG!!!!
WHY would you want to do such a thing, you ask?
(Besides the obvious reasons: 1. Nothing beats Hollywood stars making ill-informed political statements at live award shows with snarky correspondents responding in kind; 2. My liveblogging prose reads like a modern day Shakespeare)
I give you THREE reasons to join me:
1. The EMMY Statuette. What the heck is that thing?
I mean, I get the Oscars statue. It’s a knight-looking dude named Oscar holding a sword standing on a film reel. But WHAT is that EMMY thing supposed to be? And WHAT is it holding?!
It looks like Flash Gordon’s wife holding up a ball of golden twine that it stole from some cat… but what does THAT have to do with television?!
We need answers!
2. Diddy.
He starred in a made-for-television movie adaptation of A Raisin in the Sun… BUT he wasn’t even nominated for it. So I am guessing that there might be some sort of revolution over this egregious oversight… And I will be there LIVEBLOGGING THE MAYHEM through it all!!
3. The Hosts…
ALL FIVE OF THEM!! I was trying to figure out who was hosting this year and learned its a motley quintuple of REALITY TV hosts! Maybe they can vote each other off the Island… I know I’ll be voting them off one by one!
TUNE IN PEOPLE!!
You can email me at griffsnotes foxnews com