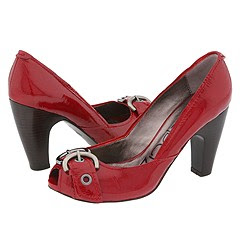 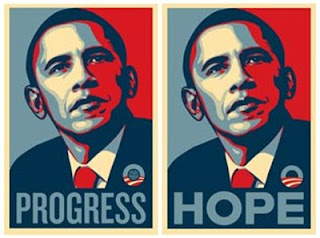 Democratic Presidential nominee Barack Obama has become so popular, that in some corners like the fashionista world… Obama’s likeness (in Che Guvara tee shirt designs) or even the simple “O” has become the latest fashion statement!
Sen. Obama even got a little free fashion boost when major designers like Diane Von Furstenberg and Derek Lam contributed designs for campaign gear!
Then came the Palin Pumps… and the bespeckled Alaskan Governor. According to a WSJ front page article today, Sarah Palin’s style – first introduced to us on the stage at the RNC Convention in St. Paul – seems to be catching on quickly and giving the economy a boost!
From her Kazuo Kawasaki rimless frames (style series 704, color 34) to her shoes, many women are emulating her style. And speaking of those shoes — the pair above that she was wearing when she was introduced to the nation as John McCain’s Vice Presidential pick — were 3.5 inch heels in the “Naughty Monkey” line of House of Brands shoes.
I will admit that the extent of my fashion sense is entirely limited to the few episodes of Project Runway that I have watched with my wife… but I can tell you this: If a Presidential Fashion War breaks out in the next 53 days, people will definitely tune in and pay attention!
Let the Fabric Fight begin!
You can email me at griffsnotes foxnews com