The first contest of the 2016 presidential campaign has come to an end. Texas Senator Ted Cruz came in first place in Iowa's Republican presidential caucus, followed by Donald Trump in second and Florida Senator Marco Rubio in third. Ben Carson was in a distant fourth. For the Democratic presidential caucus, Hillary Clinton and Senator Bernie Sanders ended in a close call.

Many thought Donald Trump would walk away the winner in Monday's caucus, but instead, it was Texas Senator Ted Cruz giving the victory speech.

Months of "get out the vote" rallies and stump speeches must have worked.

Cruz got almost 28% of the vote in what the Iowa GOP says was a record turnout of 180,000 Republican votes cast.

Although the Iowa democratic Caucus ended in a virtual tie, Hillary Clinton said that she's ready to fight Bernie Sanders for the Democratic nomination.

(Clinton) "And I am excited about really getting into the debate with Senator Sanders about the best way forward to fight for us and America."

Clinton is facing a much tougher race in the New Hampshire primary - which takes place next Tuesday. Most polls show Sanders has a sizeable lead in the Granite State.

CLICK HERE for full results of the Iowa Caucuses 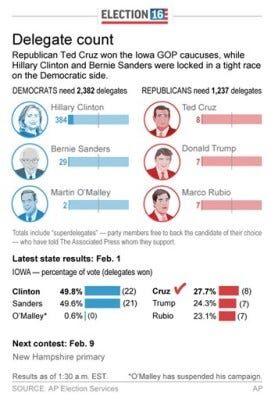