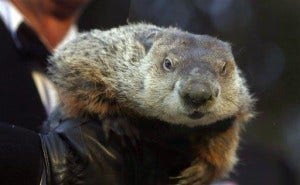 A community in Southwestern Ohio is demanding answers after a less than accurate prediction from Punxsutawney Phil.

He's been doing it for years.

But thanks to a late-season cold snap, Punxsutawney Phil might have some explaining to do about this year's 'early spring' prediction. Mike Gmoser is a Prosecutor in Butler County, Ohio who's putting Phil on notice.

Gmoser: "It's definitely not spring. It's a snowstorm. And temperatures in the teens. Something's wrong with Phil. You know Punxsutawney has some answers that he needs to give and I think I'm just gonna have to indict him."

The penalty? Either Phil be replaced, or be put to death.

Gmoser: "I'm not as cold and heartless as you might think. But you know I deal with a lot of rats every day."

Gmoser also says a critter from Ohio would be a better choice.

Watch the VIDEO below for more on this story: