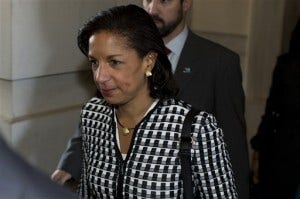 In a letter to President Obama on Thursday, Susan Rice asked to be withdrawn from consideration for Secretary of State.  Citing the distraction that a potential confirmation process would bring, Rice wrote that the trade-off simply would not be worth it during a time of more pressing needs in our country.  The President accepted her request.

In a FOX News poll released Thursday afternoon, only 19% of those asked said they'd like to see President Obama nominate Susan Rice for Secretary of State; 23% said John Kerry and 55% said either they were unsure or it should be someone else.

The President is moving closer and closer to naming a new national security team - this is in a broader context.  I've been told by senior Democrats that the President now has Chuck Hagel, the former Republican Senator, as his leading contender to be Defense Secretary, that he had a meeting, Hagel did, with the President a couple weeks back here at the White House.  I was also hearing separately, before we even heard this about Susan Rice, that John Kerry, the Senate Foreign Relations Chairman, had become the leading contender for Secretary of State.

I've also heard separately - we'll see whether or not this still happens - that Susan Rice has been under consideration for National Security Adviser inside the White House.  The point being that's a very senior post where you still have a lot of influence over the President's national security policy, but it's a position here in the White House that would not be confirm-able by the Senate.  So, the President could just appoint her to National Security Adviser.  We'll see whether or not he does that, some Democrats have floated that to me.

The point being, they knew - and the reason this is breaking now - they knew inside the White House, Susan Rice herself knew at the U.N., that with Sen. John McCain and other Republicans threatening to filibuster her nomination to Secretary of State that that was just going to be a bloody the President did not want to kick off a second term with.

READ the official statement from the White House:

"Today, I spoke to Ambassador Susan Rice, and accepted her decision to remove her name from consideration for Secretary of State. For two decades, Susan has proven to be an extraordinarily capable, patriotic, and passionate public servant. As my Ambassador to the United Nations, she plays an indispensable role in advancing America's interests. Already, she has secured international support for sanctions against Iran and North Korea, worked to protect the people of Libya, helped achieve an independent South Sudan, stood up for Israel's security and legitimacy, and served as an advocate for UN reform and the human rights of all people. I am grateful that Susan will continue to serve as our Ambassador at the United Nations and a key member of my cabinet and national security team, carrying her work forward on all of these and other issues. I have every confidence that Susan has limitless capability to serve our country now and in the years to come, and know that I will continue to rely on her as an advisor and friend. While I deeply regret the unfair and misleading attacks on Susan Rice in recent weeks, her decision demonstrates the strength of her character, and an admirable commitment to rise above the politics of the moment to put our national interests first. The American people can be proud to have a public servant of her caliber and character representing our country."

CLICK HERE to read the letter from Ambassador Rice to President Obama.