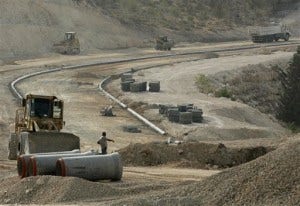 The announcement by Israel that it's planning to build 3,000 new homes in an area here known as E-1 has drawn sharp criticism from the U.S. to Russia. The houses will largely cut off the West Bank from east Jerusalem.

Israeli lawyer Danny Seidmann says it doesn't matter if the buildings are illegal under international law:

(Seidmann) "The effective law in Israel in the West Bank is the law of Israel so the chances of stopping this by legal means are remote indeed."

A number of governments in Europe have also summoned their Israeli ambassadors over this.