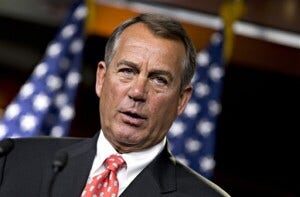 Republicans have sent a "bold counter-offer" to President Obama, based on a plan proposed to the debt supercommittee by Erksine Bowles, in an effort to avoid going over the "fiscal cliff." 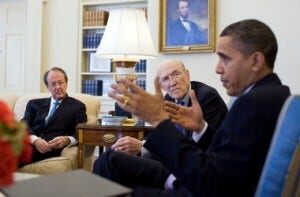 President Obama has indicated he won't sign legislation that fails to raise tax rates on the wealthiest 2% of Americans.

UPDATE: The White House has released the following statement on the GOP proposal:

"The Republican letter released today does not meet the test of balance. In fact, it actually promises to lower rates for the wealthy and sticks the middle class with the bill. Their plan includes nothing new and provides no details on which deductions they would eliminate, which loopholes they will close or which Medicare savings they would achieve. Independent analysts who have looked at plans like this one have concluded that middle class taxes will have to go up to pay for lower rates for millionaires and billionaires.  While the President is willing to compromise to get a significant, balanced deal and believes that compromise is readily available to Congress, he is not willing to compromise on the principles of fairness and balance that include asking the wealthiest to pay higher rates.  President Obama believes - and the American people agree - that the economy works best when it is grown from the middle out, not from the top down.  Until the Republicans in Congress are willing to get serious about asking the wealthiest to pay slightly higher tax rates, we won't be able to achieve a significant, balanced approach to reduce our deficit our nation needs."

CLICK HERE to read the letter from GOP leaders to President Obama.

WATCH more on the debt talks: