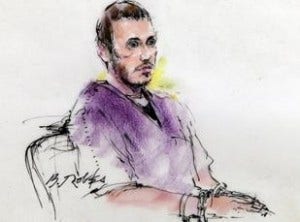 Court documents in the case against Colorado movie theater massacre suspect James Holmes show he threatened a professor prior to the shooting, but defense attorneys say the prosecution's allegations are false.

The documents indicate James Holmes was banned from the University of Colorado campus for threatening a professor, just weeks before the shooting. That is not what university officials had said. They had said that Holmes voluntarily withdrew from the neuroscience program.

This is key since legal experts say prosecutors are trying to show that Holmes was angry at the university. It's the same university where he met with a psychiatrist, the one to whom he sent a notebook. The documents say prosecutors haven't seen that notebook, but that a detective skimmed its pages. It had been reported earlier that this notebook may contain detailed plans of the shooting.