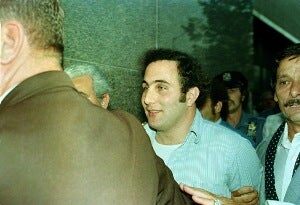 An infamous serial killer, who terrorized New York in the late 1970's, has been denied parole yet again. For the sixth time, the New York State Parole Board, denying David Berkowitz - also known as "Son of Sam" - parole.  Berkowitz was convicted of fatally shooting six people, and injuring several others, in a string of assaults using a .44 caliber handgun in and around New York City in 1976 and 1977.  Berkowitz says Jesus has forgiven him.

That from a prison video in the 1990's.  David Berkowitz has served 35 years in prison.  He's eligible for another parole hearing in two years.