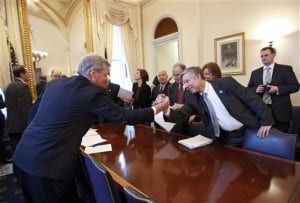 Moving with swiftness rarely seen in congress, the House and Senate both approve a package to extend a payroll tax cut and jobless benefits.

Even supporters say the compromise is far from perfect.

(Camp)"As a Conservative, i look at the agreement and see some very big wins."

(Hastings)"It does contain critical provisions that many Democrats negotiated."

Like an extension of the payroll tax cut without offsetting spending cuts. And the bill prevents payment cuts to medicare doctors.

President Obama pressured Congress to pass the legislation ahead of next week's recess.