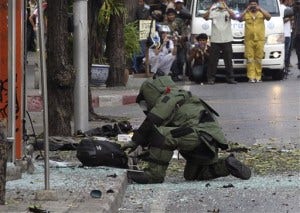 Two Iranians are in custody in Thailand after one of them staged an attack that wounded five, including himself.

Israeli Defense Minister Ehud Barak accusing this attack in the Thai capital Bangkok as being backed by Iran. It's thought the target was Israeli's.

Meanwhile the public security minister here in Israel saying his country will 'settle the score' with the perpetrators.

The blasts come a day after an Israeli diplomats car was bombed in India and an attack stopped outside the embassy in Georgia -- Israel also blaming Iran and Hezbollah.

Security has been stepped up here in Israel particularly around embassies and the airport outside Tel Aviv.