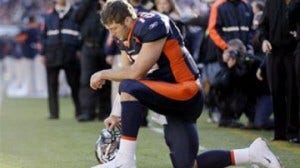 His last name has become a verb, and now a hit song has been rewritten for and about Denver Broncos quarterback Tim Tebow.

John Parr rewrote the lyrics of his '80s hit 'St. Elmo's Fire' to include phrases like: "Down on one knee", "A prisoner", and "I'm trying to break free, all I need's my Broncos team" and of course the chorus, "Take me where my future's lyin', Tim Tebow's fire".

The singer says he was inspired by Tebow so he wanted to modify the lyrics. And there are several other songs honoring or making fun of the football star.