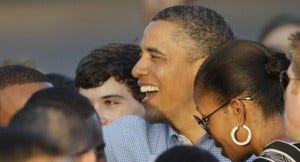 President Obama has no caucus-watching plans.

(Carney) "I'm sure he is as...no more or less interested than the rest of us."

White House Press Secretary Jay Carney says the President will speak with Democratic caucus goers from a Washington hotel, via a video link.

And while the White House insists the President is not focused on re-election, he is making remarks on the economy tomorrow in the battleground state of Ohio.