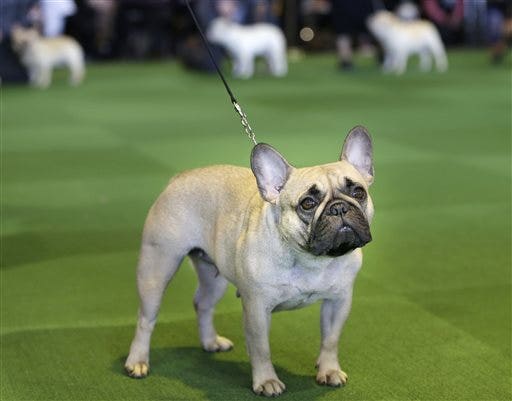 FILE - In this Feb. 16, 2015 file photo, a French bulldog competes at the Westminster Kennel Club show in New York. The American Kennel Club is releasing its 2014 breed popularity rankings on Thursday Feb. 26, 2015. Labrador retrievers hit the top 10 in the 1970s and havenÂ't left since but German shepherds, golden retrievers and beagles are holding their own in the top five, with Yorkshire terriers, poodles, boxers and Rottweilers filling out the top 10. BulldogsÂ' rise is no surprise to fans who extol their unmistakable, push-faced expressions and generally calm demeanors. The smaller, less jowly French bulldog - sometimes dubbed "a clown in the cloak of a philosopher" - has surged from 49th to 9th in a decade. (AP Photo/Seth Wenig, File)