"Are you out of your mind?"

That's pretty much the response I've been getting around the newsroom ever since I decided to run the marathon. It's the world's biggest race --- 26.2 miles, 37,000 runners from around the globe. The race starting on Staten Island and ending in Central Park.

Confucius says the journey of a thousand miles starts with one single step. My journey started on May 17, 2005. I woke up that morning in Sutter Memorial Hospital. My open heart surgery the previous day had been a success. Inside my new chest, was the sound of my new valve clicking away.

Through my drug-induced fog, I was contemplating my new lease on life when a nurse walked into my room and commanded me to get up. The order, she said, was non-negotiable.

You know, it really is true what they say --- about the first step being the hardest. But it's also the best.

With great trepidation, I took that step and the next day, another. The days became weeks and before long, I was putting Forrest Gump to shame.

A few months later, I moved to New York where I wuold run my very first race -- the American Heart Association's Wall Street Run. It was a 5K run. My friend Dawn and several colleagues joined me on the run. My form wasn't all that great and I was beaten by a one-legged man. It wasn't exactly a Hallmark moment, but hey... 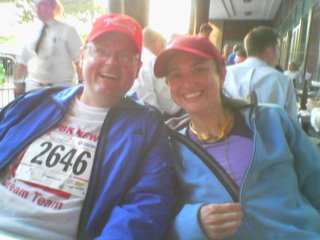 I'm not sure what to expect on Sunday. I'm a little anxious, to be honest. I'll just be glad to cross the finish line --- breathing --- a few feet ahead of the street sweepers.

But you know, that'll be just fine with me. Because right now, I'm taking life just one step at a time.